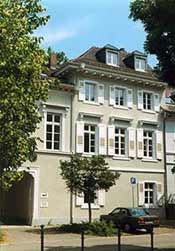 The Max-Reger-Institut / Elsa Reger Foundation (MRI) was established on 25 October 1947 by Elsa Reger, the composer’s widow, knowing that Max Reger thirty years after his death on 11 May 1916 had fallen into undeserved oblivion.

For nearly 50 years the Foundation had its headquarters in Bonn, where Elsa Reger - without biographical reference to her husband - had after the Second World War found her last place of residence. Early in 1996, the foundation moved to Karlsruhe where it took its permanent residence in October 1998 in the spacious rooms of the Alte Karlburg, Durlach.

From modest beginnings, the MRI has developed over the past decades with a passion for Reger’s music, with creativity and a love of experimentation into the centre of international Reger research, into a meeting place of musicologists and artists as well as a location for innovative cultural mediation. Furthermore, the Elsa Reger Foundation has meanwhile established, not last through multiple (and frequently honorary) commitment, the world's largest Reger collection: Nearly 200 musical manuscripts (as of March 2015), numerous original letters and documents by Reger or from his environment, works of art and devotionalia as well as a rich collection of printed and recorded music document life, works, and workings of the composer and invite everybody interested in Reger’s music to delve into the matter. Early in 1999 the Busch Brothers Archive, previously based in Hilchenbach-Dahlbruch near Siegen, was handed over to the MRI for scientific evaluation and donated to the Foundation in 2003.

The MRI – a private foundation dedicated exclusively to charitable purposes – was, after Elsa Reger's death on 3 May the sole heir of the copyright in Max Reger’s works as well as a portion of the royalties from their performances. By late 1986 copyright in Max Reger and thus the source of the funds of the MRI ended, which until then solely had been financed from the royalties. From 1987 to 1995 the City of Bonn and the state of North Rhine-Westphalia supported the MRI financially; since 1 January 1996, it is institutionally supported by the city of Karlsruhe and the Land Baden-Wurttemberg. A now extensive and ongoing support by means of external funding enables the implementation of substantial projects such as the Reger Thematic Catalogue (funded by the German Research Foundation and published early in 2011) or a new edition of compositions by Max Reger (a project of the Academy of Sciences and Literature, Mainz, supported from 2008).