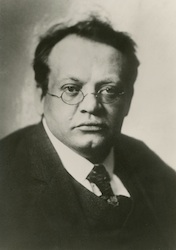 Apart from Richard Strauss, Gustav Mahler, Hugo Wolf or Arnold Schoenberg most German composers of the period around 1900 have for long been largely forgotten. Max Reger (1873—1916) is one of them, others are Hans Pfitzner, Ferruccio Busoni, Ermanno Wolf-Ferrari, Franz Schmidt or Alexander von Zemlinsky.
Born in Brand in the Upper Palatinate, Reger grew up in the town of Weiden nearby and received musical instruction already at an early age. After studies with the famous music theoretician Hugo Riemann Reger suffered in consequence of his military service and of professional setbacks a nervous and material breakdown and returned in 1898 to the parental home. There Reger's productivity increased enormously until he was able to persuade his family in 1901 to move to Munich where he expected more musical stimulation than in the Upper Palatinate. Reger, himself a Catholic, got married in 1902 to Elsa von Bercken, a divorced Protestant, which caused his excommunication. As a composer as well as a performing pianist Reger was extremely productive. In 1905 he was appointed lecturer at the Akademie der Tonkunst, resigned however one year later because of discrepancies with the predominantly conservative staff.
During a concert stay in Karlsruhe in 1907 Reger received his appointment as university musical director and professor at the royal conservatoire at Leipzig; he retained his concert and composition activities while resigning from his post as university musical director as soon as in 1908. Instead, he accepted in 1911 the position of the Court conductor at Meiningen which he held until the beginning of 1914. The intense composition and concert activities were retained also after he had moved to Jena in 1915, whence he once a week went to Leipzig for his teaching duties. On one of these trips, Reger succumbed a heart failure in May 1916.
Reger attained continuous fame above all through his organ works